Welcome to PVP WOW
welcome to pvpwow. pleae log in, or register if you have not yet registered

we are a pvp world of warcraft private server, with working instances, custom items and great community. come join us today!

welcome to the new pvpwow forums. will be adding in new features here and there. recently added a chatbox at the bottom, so have fun with that : )
our Ventrilo info is as follows: fission.fusionvoice.com and the port is 3867. come join us today!!
Search
Latest topics
» I'm leaving.

Well.. i ain't been on and i don't wanna rejoin wow in a whole anyway... but to the fact that i've been keeping track of you all and seeing how're you're all doing (Or the most of you) and also the server for personal interest that i do miss it...

It's dead...and i don't mean to be a cool person when i say that but it's the fact it is currently dead...
The website isn't as near smexy as the last website was i have no idea what happened there but it's quite strange...
And the server i don't think from what i've been hearing has had a single change since i left so... there's a low chance you're gonna get any population with the fact that the server had no content and no means of earning anything and no account creation page.
You have way 2 many staff members... there's no need to have 10 staff members taking it in turns to be online... because 1 or 2 a week ain't gonna bother coming on for there hours... you just need 3 or 4 staff members and afew admins 2 to keep things inline and an owner and ofc the loved devs =) THEE WHO DOES THA WORK =)))

Anyway... These are the basic things you needa get done... more content and a better website to start with.

Love you all and i'll cy'all around!

Love Woxy-Bunny Gal-
And if you say TLDR That's a reason the server has lost it's amazing thing.. because there was a time when i joined when you would have bothered...

With all respect Roxy but you can`t run a server with only 3-4 Staff members... Not all staff members do tickets or help the players, they help in discovering bugs, fixing missing items, placing missing or bugged NPCs .... 3 or 4 people can`t do all that and do tickets and recruit new players... So the Staff members number is just fine... And for the record i can`t wait the server to get back online coz i`m willing and ready to put a lot of time to heli in his repairing...

lol xspell rocks lol and roxy is this like the 20th time of you ment to be quitting then coming back? 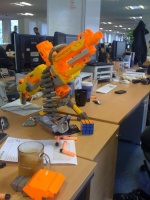 I thought that was what bug forums was for but ok. fair comment.

And tanka i've only ever left 3 times and came back once this isn't me coming back this is me doing my best to help you all.

/slit wrist xD ill be back whenever it comes up when i get the chance.

I agree with roxy and all she said about the server. why even defend this server. I mean seriosuly 15 GMs -1 players its like back in the days when all the kids made private servers to mess around with GM spells, with their friends. everytime a new player comes. he/she is like oh yea!?!? really??! i can do that! sure hire me! even though they know jack shart about the game ( most of the staff here ) and yea they might know about WoW the game itself, but when i say the game i mean the private server game. You should be hiring people who know what players want, whats fair and unfair and what players look for in votes ( rewards and such ) they should know whats popular right now pvp realms pve realms...etc. Someone who knows how to treat players and to not take things out of line oh! and be mature. Even hiring someone who can learn about these things would be a smart idea. but no! this server likes to hire little kids. or men who act like children over baby issues that happen to the server like bugs or (Vent account deletions...hehe good times, DOS attack my ass, you gave out the powers obviously trust issues are involved). This server also hires women who flirt with you then backstab you, tell kids abut their half nips, and their man dicks. the level of maturity has really fallen to an all time low around here. Hopefully things will change soon. ( becasue WoW is changing faster ). Best wishes Bitches WoW WTF 09!

Some of the things you've said i agree with other things not so much more towards the last 2 - 3 lines lol.
In any case i left because of what people told me... and i left for personal reasons for what Some1 told me.
So that's that and in me making this is the reason i was trying to help candie and other people i liked here because they told me nothing major was happening...
So there i thought ok i'll give some advice and try help you all out and suddenly every reply i had was "Omfg we don't want change" You're not willing to change the server to make it half decent but you're willing to sit there and play around making things that wont help it... that's what i saw alot of the time.

In any case i'm tired of helping you i'm tired of giving you people advice from a player prospective if you're not gonna bother trying to sort it out... No1 can get ahold of req either i hear... I would imagine hes sick but is that a reason for every1 to put everything to a halt ? No... get a new website one that doesn't suck (No offense =/) Y'know but do something productive!

I helped players when they came on.
I built a couple custom zones
Built some obstacle courses that DIDN'T TAKE 4 HOURS LIKE TIKKIS Jke jke but Y'know and then i left... within about 2 - 3 days after...

And tanka tell me a single thing in all your time here you've done constructive cause i can tell you a hundred things i've done.